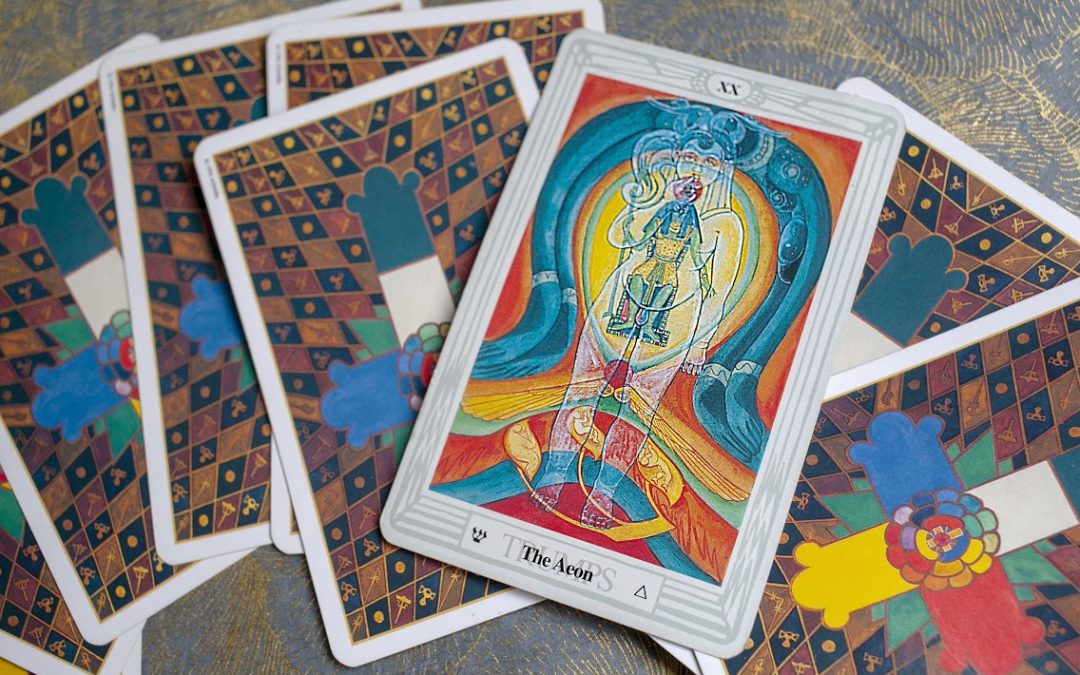 This has been one of the hardest Thoth cards for me to tap into: partly because I’ve read so many conflicting interpretations. Angeles Arrien describes the central gods as Osiris, in child and adult forms. Except the falcon-headed god at the centre is unambiguously Horus, Osiris’ son. Even the gauzy child overlay resembles Horus the Child, who was depicted in statues as a naked boy with a finger pressed to his mouth. Interestingly, this hand position features in the Egyptian hieroglyph for “child.” It’s possible this symbol was actually misinterpreted by Greek and Roman poets to mean “silence.” And so Harpocrates, the Greek God adopted from Horus, became the God of secrecy.

To me, he still resembles a boy licking honey (or jam, or ice cream) off his finger.

I think, too, of the word “horizon.” How it seems to contain the words “Horus rising,” or even “Horus sun,” even if the etymological link is invented: symbolically pleasing, but ungrounded in history. It is true that Horus became the Egyptian Sky God, and that in child forum, he represented the newborn sun warming the dawn horizon.

Back-bending over child and adult Horus, is Nut (or Nuit or Nuith), the goddess of the night sky. Angeles Arrien describes her shape as the glyph for Leo. Angel Paths connects her form to the ankh symbol. Esoteric meanings calls it the omega. The latter seems most likely to me. The Aeon card correlates to “Judgment” in other decks, and the Omega echoes that Biblical imprint: “I am the Alpha and the Omega, the first and the last, the beginning and the end.”

And I suppose that’s where the interpretation really begins for this card: both its iteration in more traditional decks as “Judgment,” and here as the Aeon, or an immeasurable period of time. The card orbits the threshold between midnight and dawn; child and adult; life and pre-life, indicated by the fetal figures nestled in the Hebrew letter ש (pronounced “shin” or “shein.”)

Crowley’s religion, Thelema, identified three aeons: the Aeon of Isis, the Aeon of Osiris, and now, the Aeon of Horus, defined by self-realization and self-actualization. It aligns closely with our conception of the Age of Aquarius: a sort of idealizing of our present potential and the future we’re tipping into.

In Little Essays Toward Truth, Crowley writes:  The Aeon of Horus is here: and its first flower may well be this: that, freed of the obsession of the doom of the Ego in Death, and of the limitation of the Mind by Reason, the best men again set out with eager eyes upon the Path of the Wise, the mountain track of the goat, and then the untrodden Ridge, that leads to the ice-gleaming pinnacles of Mastery.

So what does this all add up to?

A theme of triplicity dominates this card. There’s no obvious link to any of the signs or planets of the zodiac, but a trine symbol (△) at the bottom right, opposite the Hebrew ש (“shin.”) According to Rabbi Aaron L. Raskin, the three vertical lines of ש represent the three dimensions of a human being: kesser (will and pleasure), the intellect and emotions.

Shin has fine definitions in Hebrew. The one Crowley focuses on is “tooth.” I first interpreted this in a threatening way… the “tooth” of judgment like the “fist” of Saturn, or some other punishing body part. But there’s also the connotation of chewing your food before you eat it: chewing over an idea before you act.

When you combine all of these symbols together: Horus, the three aeons, Night in wheel pose, the fetal figures painted in the golden rod ש, alongside the traditional interpretation of this card as Judgment, the key message seems to be: only you are responsible for your own thoughts, action and evolution. The author at Angel Paths phrases it well when she says:  The Aeon forces us to acknowledge that our actions set up a chain of cause-and-effect for which we are solely responsible. Here we pass through the fire of purification, shedding dead and dying wood as we go. We judge ourselves frankly, forgive, and leave the past behind.

There is a theme of archways. Of passing through. Not passively awaiting our day of judgment, but turning an eye onto our own patterns, our own participation in games.

As Camus writes in The Fall:  I shall tell you a great secret, my friend. Do not wait for the Last Judgment. It takes place every day.

When this card comes up in readings, it may indicate a turning point. A moment where you pass into a new phase (or aeon.) All of your decisions and actions until now have led to this moment. You are your own gatekeeper. Trust yourself.